Digital Rupee Launched in India: What Is It and How It Works? 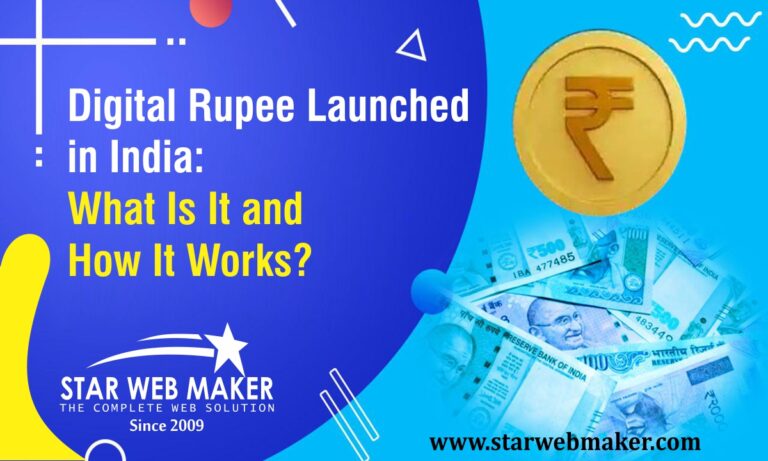 On December 01, 2022, the Reserve Bank of India launched its first retail Digital Rupee, or e-Rupee, trial. The Central Bank Digital Currency (CBDC), similar to bitcoin in specific ways, will be available to retail consumers.

What Is a Digital Rupee?

The Reserve Bank of India has designated the e-Rupee, a digital token that stands in place of legal money, as an electronic rupee. It is the same as a fiat currency and can be replaced one-to-one with the fiat currency.

Unlike cryptocurrencies, the digital Rupee is issued in the same denominations as physical cash, as well as paper currency and coins.

Below Are the Three Main Reasons Why CBDC Is Gaining So Much Attention:

How Will the Digital Rupee Work?

The Digital Rupee or e-Rupee will be a digital token that will act as a legal tender. They will be issued in the same denominations as paper money and coins & distributed through intermediaries, in this case, banks.

As per the Central Bank, users can transact using an e-Rupee through a digital wallet issued by partner banks and kept on mobile phones and gadgets.

It is possible to conduct digital rupee transactions between person-to-person (P2P) and person-to-merchants (P2M).

Customers can make payments to businesses by scanning QR codes displayed at merchant locations exactly as they do for UPI payments. The e-Rupee would have physical cash characteristics for example trust; safety, and settlement finality. Similarly, that cash earns interest, this form of money can be converted into other forms of money, for example, bank deposits.

Four more banks will finally join this pilot, including Bank of Baroda, Union Bank of India, HDFC bank, and Kotak Mahindra Bank, which will increase to other cities such as Ahmedabad, Shimla, Guwahati, Hyderabad, Indore, Kochi, Lucknow, and Patna.

Additionally reducing the need for cash, the CBDC would provide a regulated alternative to cryptocurrencies on the market.

Transaction costs would be kept low because of the underlying technology. As a result of its interoperability with other payment systems for example UPI, it would complete the mobile payment ecosystem.

Expected Impacts of The Digital Rupee in The Future?

Many countries, including China, Ghana, Jamaica as well as certain European countries, are investigating CBDC products. Several companies have even developed their digital currencies. Nine countries have full operations CBDCs. The Caribbean is home to eight of the nine countries.

The Digital Rupee or e-Rupee will improve the safety, traceability, and accountability of money flow in the world’s fifth-largest economy. In place of a distributed ledger, the RBI will govern the e-Rupee, giving the digital currency legal protection & stability. Digital assets can be tracked and are guaranteed by an independent institution, which means it should be difficult to commit fraud against UPI users since the money is undetectable once it leaves a bank.

The retail Digital Money, which is available as of December 1, will be delivered in two stages. The selected banks will be issued by the central bank firstly. Banks will continue to deliver currency into the customer’s hand.

The launch of the Digital Rupee in India is expected to rise the efficiency, transparency, systemic resilience as well as governance of our currency management system.

Digital currency will make it possible to carry out transactions without opening a bank account. Once the Digital Rupee is launched, the government can view all transactions taking place within authorized networks, assist in real-time account settlements, and preserve ledgers.

CBDC-backed currencies are a natural development in the evolution of digital currencies. It removes numerous inefficiencies that hamper cryptocurrencies by giving stability & confidence with the backing of the RBI.

The Central Bank Digital Currency will be another important step toward implementing blockchain for financial services, aligning India with the rest of the globe, which is fast moving toward adopting digital currencies.

Please fill free to get share your Requirement with us

Quick Enquiry For Your Requirement